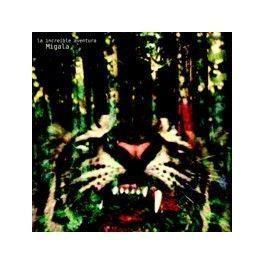 The front cover of Migala’s “Arde” ("Burn") (01) album, showed the name of the band in brackets and the title in inverted commas, which illustrated the situation the group of seven (then) was in at that time. They had reached a dead end and each one of them had “burned out” in one way or another. A year later they produced “Restos de un incendio” ("What’s left after a fire") (02), which marked the end of and era and the start of something new: shining ashes, flashes and an announced combustion. In their final album, “La increíble aventura”, there was no longer a trace of fire or ice, smoke or seasons, heaven or hell. What remained was the noise of cars and life in full flow. Contained violence about to burst. Garages at the train station, industrial estates where beds are built for lovers to meet, smoke columns and a tall chimney with white, glittering lights, refrigeration towers, cranes…instrumental rock, Sergio Leone, white noise, melodies, Nino Rota, textures, collages, lyrics (occasionally). From the math-rock of “El tigre que hay en ti” to the border references of “Sonnenwende”, from pop-folk classicism of “Your Star, Strangled” to the epic of “Lecciones de vuelo con Mathias Rust”, passing through poetic pieces such as “El gran miércoles”, one of the two only songs of the record in which Abel Hernández sings.