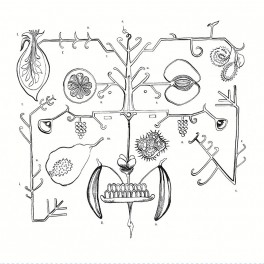 Rafael Martinez del Pozo, ex-leader of LA JR(with four albums on Acuarela), was previously one of the founding fathers of the Spanish 90s indie scene with Eliminator Jr -a group created together with Nacho Vegas- and their two releases on Elefant Records. Since 2004 -apart from being a producer for Roldán, Dos Gajos, Gente Joven, A Veces Ciclón, or Lorena Álvarez, among others- he is alsoAA TIGRE.

“Las Frutas Amarillas” is his third album in a vein not far from Mount Eerie, John Fahey, Felt, Nick Drake, Guided by Voices or Robert Johnson: austere music close to the so-called anti-folk and also to the most primitive blues that serves as a beacon for some very interesting texts full of enigmatic domestic poetry