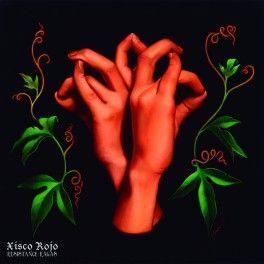 Taking a look at the career – unique, risky, original- of Spanish guitarist and songwriter Xisco Rojo, it seemed as inevitable that it would eventually cross paths with Acuarela, where he now publishes “Resistance Ragas”, an exclusive single in a constant intense state. In his two songs he shows his talent -following in some way the free spirit of John Fahey and sounding like Ry Cooder, Jack Rose, Sir Richard Bishop and even Gastr del Sol- to deconstruct folk, pass it through his very personal blender of experiences and influences, and assemble it again with outstanding results.

After some years of fallow playing in other projects and as backup musician, Xisco Rojo began in 2013 a solo project based on primitivism, chamber folk and psychedelia, with a strong experimental approach inherited from his past trajectory in the noise, jazz and improvisatory scenes of Berlin, Philadelphia and Madrid. Combining elements of Western and Eastern traditions, he succeeds at creating a unique personal style, rich in counterpoints, mysticism and lyric depth.

Following the releases of the EP 'Moonlight in the fountain' (Self-released, 2013) and 'Ruina Montium' (Holy Hoof Records / Envelope Collective, 2014), an impromptu electric guitar session entirely written, recorded, mixed and mastered in one day, he released in 2015 his second album, focused on acoustic guitar, 'You Got To Walk That Lonesome Valley' (Holy Hoof Records, 2015). 2016 saw the release of 'Live in Seoul & Kyoto' (Pequeña Criatura, 2016), a cassette with material from his concerts on the Asian leg of the 'Lonesome Tour' and, two years later, ‘Encomienda’ (Holy Hoof Records, 2018), an improv session together with the guitarist Carnisaur.

'Resistance Ragas' (Acuarela, 2018), is now a 7” single with two evocative pagan invocations performed with a Weissenborn, an acoustic lap steel that establishes Hindu invocations through the microtonal possibilities of the instrument.