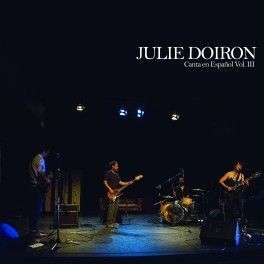 What started as a homage (that limited edition 7” with translations of “Swan Pond” and “Yer Kids” in 2015) to those 60’s and 70’s vinyls in which well-known English and American artists dared to present their repertoire in a broken Spanish, and after “Julie Doiron Canta en Español Vol. II” (Acuarela Discos, 2017), “Julie Doiron Canta en Español Vol. III” is the third episode of a series-saga of adaptations into Spanish of many of Julie’s best songs and it is intended to extend to (almost) all of her repertoire in the next lustrum (and beyond).

Rerecorded and adapted to Spanish by Jesús Llorente (translator of Philip Larkin, Raymond Carver and Dennis Cooper, author of three poetry books and lyrics for Migala or The Wave Pictures) the intention was to try to find out how would have Julie expressed herself without using English or French, saying the same thing but with other words and staying true to her style.

In this new release, recorded in Carlos Ortigosa’s studio in Valencia, Spain, and backed up by her live band in Spain David Campillos an Javi “Galope” (yes, they were the fabulous musicians that played with her last Primavera Sound), the improvement is more than noticeable. Julie Doiron reinvents herself and sings with charm, nerve, skill and with an almost perfect Spanish.

In this record we find songs from different moment of her career. 5 interpretations of “Taller Beauty” (recorded with a band for the first time and transformed into “Belleza Aumentada”, a true indie-rock diamond of many carats), “Who Will Be The One?”, “Don’t Ask”, “Sorry (Part II)” or the doironian classic “Snowfalls in November”. It also includes “Thought Of You” (“Pensando en ti”), one of her most recent songs which has never been released in a physical format.