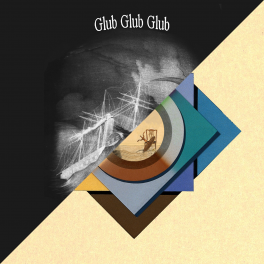 Glub Glub Glub is the title of Gente Joven’s third record, dazzling deviation in the context of Spanish indie, architects of a “picnic dream-pop” (as they like to define it) in the vibe of the Sr. Chinarro of “La Pena Máxima”, the first Slowdive/The Magnetic Fields and close to Spanish indie cult band Family, all filtered through noise-pop. 12 tracks in Spanish in the same emotional field which fluctuates between the evocations of memories lost in time and the hope of a fully realized life. Rafa Martínez del Pozo (Eliminator Jr, La Jr, AATigre) stars as the engineer of the record.

Gente Joven’s frontman, Fernando de la Flor, gifted us with this text about the origin, climax and denouement of the record:

“The why” of my ringings: The afternoon of June 6th 2016 I was finishing the last details of what would be Gente Joven’s third record. Back then it didn’t have a title but it was practically finished. That same night, around 2 a.m., I woke up with a strong ringing in my left ear, similar to the one you get when you leave a gig. Only this time I hadn’t gone to any concert and the volume of the ringing was unbearable. I knew something was wrong. In the past I had had “tinnitus” (this is the actual name given to hearing one or many sounds – not voices- which are not generated by an external source) just like everyone else, but none such as this one. It was constant and its volume and tone were especially irritating. It was something like having the dentist drill sound blasting, inside your brain 24/7. After different consultations and medical checks the conclusion was that there was no cure or treatment to eliminate or soothe the “Tinnitus”. They made it clear that I would have to get used to living with this grasshopper army forever. In perspective of not being able to enjoy the calm of silence, from one day to another my world closed up on me, including Gente Joven’s third record. From this moment on, my life went on more or less like this:

Paralysis. Desperation. Insomnia. Tinnitusitis. Failed experimentation with sound therapy, magical herbs, witchcraft and even praying. More desperation. Increase of tinnitusitis. Tone and texture of the ringing mutated to become a tutti-frutti of random sounds. Great. Fear. A lot of fear. From witchcraft to medication. Yes to opiates. From medication to meditation. Monk life. 10 in gymnastics and 0 in stimulants. Cohabitation with my new-worst-best-friend and acceptance of myself. Less fear. Less insomnia and more repairing sleep. A slight less perception of the tinnitus. Better life quality. Accustomed to the tinnitus. Back to normality.

As we were saying, Pablo and the almost-deaf man decide to finish the record, but this time delegating more in the other people involved. And if the almost-deaf man didn’t take care of his hearing when he could, before or later he will have to, actually, from now on he must. It happens to be that very close to Castro de Cepada, close to the town of Astorga, León, Esperanza Collado (Dos Gajos) and Rafa Martínez del Pozo (Eliminator Jr, La Jr, AATigre) have their studio and house. Making the decision to finish the record there was fast and easy. We showed up one night and they gave us food and shelter. We sang our songs and they sang with us. We arrived with our beatbox, reverbs and chorus and they recorded charangos and palmas. We had heartburns and they gave us Almax. We had insecurities and they contributed their experience. We had Cacahuete and the rest of the band almost always by our side. During the recording there was the sound of the heaters and during lunch the songs of Michael Jackson, Lorena Álvarez, The Beach Boys and Roldán. It all happened in a newly paved street, with gray and unnecessary sidewalks where there was soil and leafy cherry-trees, inside of a beautiful adobe house worth of the original landscape. Glups, Glups, Glups, just like we do when we drink with our brothers or when we swallow the major’s impositions, major which would be better off if he’d lived as a fisherman. Glub, Glub, Glub, just like fish murmur underwater in silence and the boats go down before sinking. Or was it the other way around?