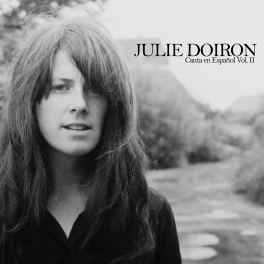 After releasing a limited edition 7” in 2015 with “Swan Pond” and “Yer Kids”, “Julie Doiron Canta en Español Vol. II” (Acuarela Discos, 2017) is the second in a series of upcoming albums of adaptations into Spanish of some of Julie’s best songs.

As a homage to those 60’s and 70’s vinyls in which well-known English and American artists dared to present their repertoire in a broken Spanish, in this beautiful Mini-LP we find 7 songs of Julie Doiron’s setlist recorded again for the occasion and adapted into Spanish by Jesús Llorente, translator of Philip Larkin, Raymond Carver and Dennis Cooper, occasional lyricist for Migala or The Wave Pictures and author of three books of poems. The objective of these adaptations was to escape the word-for-word translation and to figure out how would have Julie expressed her lyrics without writing in French or English, saying the same thing but with different words, without betraying her essence.

With this in mind and based on diverse references such as the Antonio Machado who paraphrases Whitman in “The Open Road” or on iconic popular Spanish phrases sang by flamenco masters such as El Torta, in “Julie Doiron Canta en Español Vol. II” we face the (re)interpretation of six songs: “Homeless”, “In This Dark”, “Lovers of the World”, Sending the Photographs”, “The Wrong Guy” and “Dance Me”; and an ad hoc text entitled “Brumario” (arranged with the original music of “Le Piano” from her 2001 album “Desormais”), all of this performed by Julie Doiron with charm, feeling, audacity and skill.