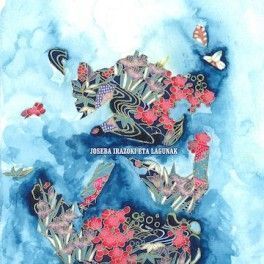 The distinguished guitarist Joseba Irazoki (well-known musician for his career in the Basque band Atom Rhumba, or his work as an accompanist in the famous 80’s Spanish band Duncan Dhu or as a member of Nacho Vegas’ band) eta Lagunak (Joseba Irazoki & friends) presents an exclusive 7” with two intense, wild, lyrical, moving and thrilling songs.

“Irudipena” and “Udaberriko eguzki” are the two songs which (with a sound in between the Basque poetic tradition of singer-songwriter Benito Lertxundi and the motley post-hardcore of artist like Fugazi, Lisabö or At The Drive-In) shine by their own merit trespassing the frontier of the Spanish indie scene.