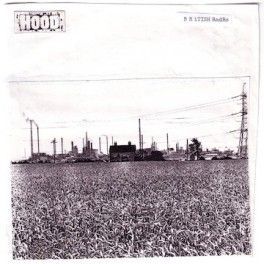 Although it is true that Hood never officially announced their break-up, it is also true that for over a decade they have not been that creative rampant cell which we were used to until circa 2005. That is why the publication of “British Radars”, an exclusive limited edition vinyl containing 6 songs, is such an important event.

Being a sort of facsimile edition of a 7” that could not be released at the time (1994) because of various circumstances (as explained by Richard Adams with a lot of sense of humor in the previous notes to the single) its contents goes beyond the mere time capsule. The matter of urgency that the songs reveal (some unpublished, others renovated through a new mix or in different versions regarding the original) are so current, so contemporary that there is no room for nostalgia.