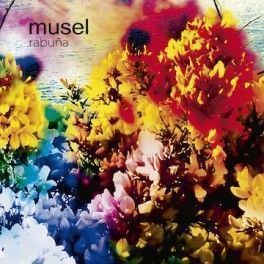 The prestigious Californian musician Dorian Wood says that MUSEL, Óscar Vilariño's new project (ex-Triángulo de Amor Bizarro -one of the most popular indie Spanish bands-, and also part of A Veces Ciclón), is “a lovely shoegaze wet dream”. And with good reason, since in the four songs that compose “Rabuña”, they reveal high quality noise-pop in a withering, almost boreal way.

The idea to create Musel came up in the beginning of 2011 when Óscar Vilariño (Triangulo de Amor Bizarro's ex-keybordist, ex-Vale Tuda and also part of A Veces Ciclón) felt the need to write simple pop songs influenced by musical coordinates close to the ones of The Velvet Underground, Galaxie 500, Yo La Tengo or Codeine. It was in 2013 and after his participation in the compilation released by the association Desconcierto Cultural on the occasion of the celebration of Record Store Day Galicia, when Acuarela offered them to work together.

Musel are a long-haul band, to listen to slowly, without haste. And it is here where the fact that their debut is such a peculiar and grateful format as this 10” limited edition of immediate impact really makes sense. In each one of the 320 copies of “Rabuña”, one can enjoy that tense guitar feedback which explodes in grayish clouds, always transporting the listener to a dimension which is not his own, with hypnotic chords and beautiful melodies. Shoegaze in the Galician style (and -important fact- in Galician), northern and febrile Slowcore, with raindrops gushing down the forehead, suffocating.

Musel are capable of reproducing those magical atmospheres in their songs: being able to name, as it happens in their mother tongue, the thousands of different names of ways there is to rain.