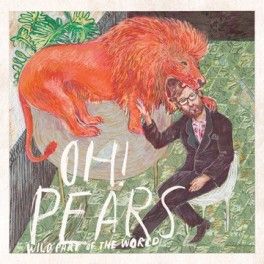 Oh! Pears is Seattle-via-Philadelphia’s Corey Duncan, whose work draws a kaleidoscope of influences from disparate musical worlds (Neutral Milk Hotel, Duke Ellington, Broadcast, Chopin) to create songs with transformative power. After spending much of the aughts recording and touring extensively with Philadelphia’s Pattern Is Movement, (even briefly backing St. Vincent for an early tour), Duncan left the band to strike out on his own. Oh! Pears Fill Your Lungs EP (2010) aired out musical ideas saved up from Duncan’s years in Pattern Is Movement.

An orchestral pop odyssey, the debut full-length Wild Part Of The World sounds out the culmination of Duncan's musical and personal discoveries from his years spent in his adopted home of Philadelphia. The album was recorded two weeks before he moved back to his birthplace of Seattle, Washington. The record is a walk through the menagerie of Duncan's mind, from the warm, head bobbing pop of "It's Real" and "Under The Olive Trees", to the heartfelt 1930s balladry of "Natasha" and "Dark and Muted Eyes", to the dark classical/modern R&B influenced "Fill Your Lungs" and "Helena". Plus an acoustic/vocals adaptation of Tchaikovsky's 5th Symphony that owes more to Elliott Smith than to Tchaikovsky.

Duncan's emotive baritone voice is the narrator and navigator that guides you through the menagerie, floating over sounds that are sometimes strange, sometimes disquieting. There's a layer of what Duncan likes to call "steam psych" that settles into your ears through the entire record, seeming to naturally emanate from the hazy strings, the hyper-breathy whistling, and the slightly unplaceable distorted acoustic guitars.

The live version of Oh! Pears ranges from solo to a 13-piece chamber orchestra to electric guitar, strings, synths, and beat machines. Duncan has completed multiple tours in the US and Europe, sharing bills with such bands as TV On The Radio, Au, Nat Baldwin and Buke And Gase. He was featured on the NPR Music program, World Café: Next. The full length Wild Part Of The World will be released digitally and on vinyl  September 16th. The CD will see the light of the day on October 28th.